I’ve been getting into the Christmas spirit in many ways: the house is awash in tiny white lights and green plastic needles. Christmas music is piped in from Pandora nonstop. I made cookies. With sprinkles. I commented to Pat on the way to a neighborhood Christmas party that I wished I had something festive to wear; a holiday pin, for example. (And at that moment I realized I had completed the transition into becoming my mother.) 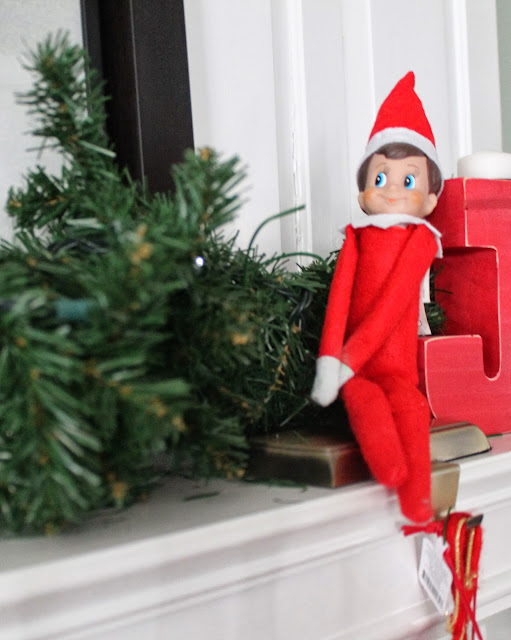 But there’s one Christmas tradition (if you count something we did last year for the first time as a tradition) that I’ve been holding out on: The Elf on the Shelf.

As many of you know, I’ve been counting on Noah’s amorphous sense of time to let me delay the Elf’s arrival. Did it really matter if he came December 1 or December 21? Like me at a company Christmas party (which I did not have this year, and let me say, I missed), wasn’t it enough for the Elf to just make a brief appearance?

But I wasn’t factoring in a powerful, recently introduced force: friends.

When we moved to our new house, we scored a neighbor trifecta. To our right: the neighborhood piano teacher. Across the street: a preschool teacher. (On either side of that teacher? Responsible teenagers who babysit.) And to our left? A family of three boys, the youngest of whom is also four. Bingo.From the day we moved in, Noah and their youngest, Alec, have been inseparable.

Not that it’s been without drama – I’ve had to mediate several “He wants to play inside but I want to go outside and now we’re both pouting” matches. I have, at Noah’s behest, Cyrano de Bergerac-ed a couple apologies from him to Alec.

But overall, it’s a good thing. From approximately 2:00, when the top of Alec’s head appears at our front door window, until it’s dark and time for dinner, Noah and Alec are in the playroom building elaborate roads, at my kitchen table eating peanut butter graham crackers and apples, in the backyard making “pinecone soup” or steering any number of wheeled toys between the yards.

On Sunday, Noah came home from playing next door and said, “Alec’s Elf is at his house. Why hasn’t mine come yet?”

“Uh, maybe he had sleigh trouble. Or maybe Santa needed him to help out with making presents.”

“Oh, yeah. To help the other elves that aren’t elves on the shelf.”

Sunday was an incredibly busy day: church and shopping for the kids’ teachers and baking cookies and neighborhood luminaries and two separate gatherings. It was exhausting, but it also reminded me that exhausting days are often the happiest days.

That said, as Pat and I stood in the kitchen at 10:30 p.m. realizing that we had agreed to put the Elf out the next morning, climbing to the attic to get the Elf was almost more than I could handle. The idea of having to come up with some sort of splashy introduction, or a complicated explanation about where the Elf had been all this time, was officially too much to bear.

Luckily, Pat is a practical guy.

“We just have to put him on a shelf, right?”

We put him on the mantle. We put the accompanying “Elf on the Shelf” book on the kitchen table, to give Noah a clue. And then we went to bed. 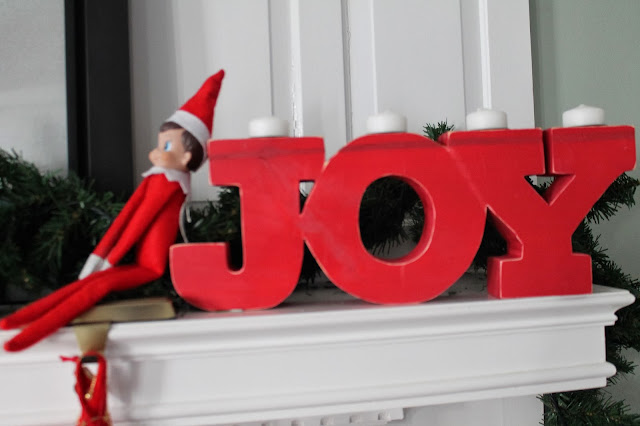 The next morning started out like every weekday morning: Noah runs ahead of us to get downstairs for breakfast. He hides (in the exact same place every time, between the couch and the ottoman) and yells from his hiding place for us to find him. Rory and I approach the couch wondering loudly where Noah could possibly be. Then Noah jumps out, yells “Boo!” and Rory screams like he’s auditioning for a horror film. Then Rory goes over by the couch, bends halfway behind the ottoman, stands up and yells “Boo-yah!” to a much less enthusiastic crowd.

Noah finally made it to the breakfast table. He noticed the book at his spot. And guys, it was like clockwork.

“Mom! Why is this Elf and the Shelf book on the table?”

“I don’t think it was here when I came down. I think it just appeared. I think the Elf is here!”

It didn’t take him long to find “Elfie,” as he named him last year, on the mantle. (When I came downstairs I had found Elfie face-planted in front of the fireplace, but was able to shove him back up among the artificial greenery while Noah crouched behind the ottoman, waiting to be discovered). I caught that moment on camera. It was enough to melt a mother’s grinchy old icicle heart. 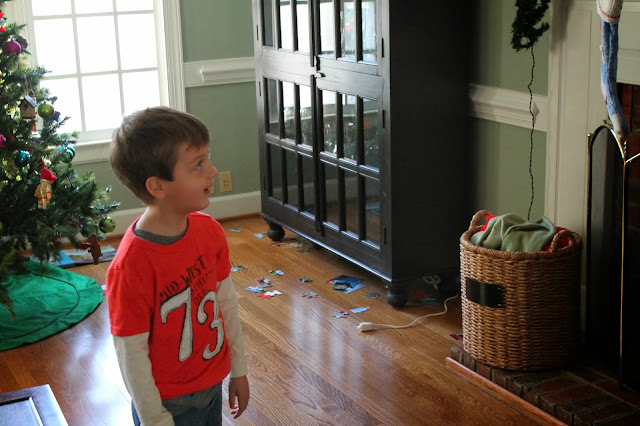 Naturally, Elfie was the only topic of discussion at breakfast.

“I’m going to tell Alec that my Elf came.

I wonder if ours will move tonight. Alec’s is still on his Christmas tree.

Mom, you can move ours if you need to.”

“I don’t think people are allowed to touch the Elf, Noah.”

“Well, you know, they’re allowed to help if the Elf asks them to.”

“I’m going to tell my class that the Elf came. And I’m going to ask Santa what took my Elf so long.”

“Um, when you get a chance to talk to Santa, maybe you want to focus on telling him what presents you want.”

And on it goes. This morning, the Elf moved to the window above the kitchen sink. From Noah’s reaction, you would have thought we had woken up to manna from heaven.

We didn’t do anything special with the Elf. We didn’t stage any Pinterest-worthy Elf dioramas. He didn’t have anything to offer other than those floppy legs and that creepy painted-on smile. He just showed up. And for Noah, that was good enough.