Six years ago this week on the Saturday after Thanksgiving, I received a devastating phone call. Pat had gone to a wedding in Ohio, and I was driving to the airport to pick him up. As I slowed to take a ticket for the parking garage, the phone rang. It was my sister. She was crying.

Mike was a dear friend, then boyfriend, and then friend again, from late high school through college. Though we went to the same school and had several classes together, we first got to know each other through email.

It was 1995, still the early days of the Internet. One day after school, Mike came to my house to help me set up an email account. I was [email protected], named after my favorite number and The Onion newspaper, which I had picked up in Madison the weekend before and was sticking out of my backpack as I searched the room for a moniker. Mike, whom I barely knew, sent me my first email. It was a story about how he had gone to school that night for some academic awards ceremony, but it turned out to be the wrong night. It veered into a hilarious tale of him battling with the school janitors and a disc jockey from the local radio station. I was hooked. I wrote back. And on and on it went. He’d tell me about the band he was playing in and shows he’d seen, I’d tell him about line dancing at the Sadie Hawkins dance and adventures with recently separated parents.

Then we wrote a few stories together for the school newspaper. We went to see Mortal Kombat and started going to see bands together. I met his friends and we hung out at his house watching anime and compiling mix tapes consisting mostly of punk and ska music.

I was developing a crush on him. But because we got along so well platonically, I started to think that the feeling didn’t go both ways. We were off school for Casimir Pulaski Day (an Illinois state holiday that honors a Polish revolutionary war hero the first Monday in March) when he emailed saying he really needed to talk to me about something. He hoped we could be friends no matter what happened.

I drove to his house, sure he was going to tell me he was gay.

I don’t know why I immediately defaulted to this; in Rockford, Illinois in the mid-’90s, I knew maybe one person who was out. But I steeled myself for this revelation.

I got to his house. We sat on the couch in his room. And then he told me that he liked me. I said I felt the same way. 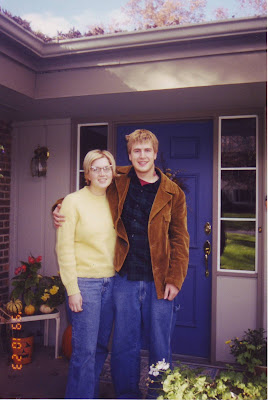 We had a great relationship: built on friendship, it was fun, honest, thoughtful. But we were 18 and headed to different colleges. I didn’t know it well enough to articulate it at the time, but I wasn’t ready to commit to one person. So we did the dance of thousands of college freshman before us: we stuck it out through the first semester before calling it off.

It wasn’t really the end, thought. We were on and off several times throughout college. The break-ups were never acrimonious, but always devastating.

We gave it one last shot the summer before senior year. I had just returned from studying abroad in England.  He invited me to visit him in Massachusetts, where his mom had moved. It was like no time had passed. We went to Martha’s Vineyard and wandered Provincetown. But the distance, and our diverging outlooks on the world, were taking a toll. We split for the last time that fall.

I saw him a few times after that. On my 22nd birthday, he came to the party at my mom’s house. We met once for lunch at Maid-Rite. I saw changes in him. He was the same sweet, funny guy I always knew, but there were also struggles. He was experiencing some darkness, some scary things that had started emerging in college, but had become more frequent.

The last time I heard from Mike was via email. We were 23. It was a short and sweet hello, but there was some sadness. Loneliness. Not self-pity, not a guilt trip. That wasn’t Mike’s way. I didn’t reply. I had just started dating Pat, and knowing my tendency to get caught up in past relationships, I felt I couldn’t reply if I wanted to get this new relationship off on the right foot.

I thought about contacting him many times over the next several years. When Pat and I were about to get married, I wanted him to know. I wanted to tell him how Pat reminded me of him in many ways: they were both musicians. They also both had a quiet confidence, a lack of pretension, a wry sense of humor, a soft heart.

But I didn’t email him. I worried that a note like that could be as hurtful as it was sincere.

So when I heard of Mike’s suicide, the grief was intensified by guilt. Sickening, searing regret that I didn’t reach out to him when I could have. I don’t know what he was going through in those last years and days. But his pain must have been intolerable. Mike was a devoted son, brother, uncle, friend. It’s hard to imagine what he must have been experiencing to feel that death was the only option, knowing that it would devastate the people he left behind. Or maybe he didn’t know.

And it made me sick to think that while I thought of him regularly and fondly, he might not have known that.

Friends: if you have a kind thought about someone, tell them. If you have it on your to-do list to call an old friend, call them. It doesn’t matter if it’s been a long time, and now it’s awkward, or there was a falling-out and now there’s apologizing or explaining to do.

Do it anyway. You might not have another chance. And then you will wish desperately for that chance again.

Not long after the funeral I had a dream that Mike visited me at my work. I was so relieved to get a chance to tell him that I was sorry, that I cared about him and missed him and was so sad to think that he didn’t know that. I got some comfort from that dream. And I fiercely hope that somewhere, somehow, he does know how I feel.

I carry around many memories of Mike. Just last month, when I took the boys to visit my mom, she brought out a large stuffed duck for the boys to play with.

“I don’t know where this came from,” she said. 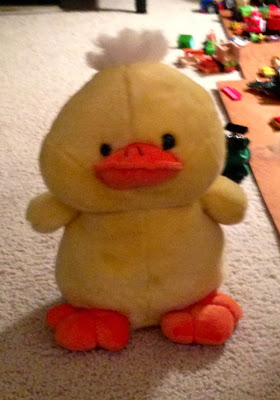 But I knew. Easter of our senior year of high school, Mike had shown up on my doorstep with it. He had seen it in the store and thought I would like it. That’s just the kind of thing he would do.

I am thankful that Mike is at peace now. And while I don’t think I will ever be completely free of regret and guilt, I’m trying to make peace with the fact that there are just some things that we can’t control. Things we will never understand.

Because so much of our time together revolved around music, plenty of songs remind me of Mike. But it’s one that we never listened to together, that I don’t know if he liked or even heard for that matter, that makes me feel most connected to him: “Casimir Pulaski Day” by Sufjan Stevens.

I always thought it was a beautiful song, but after Mike died, it took on special meaning. The final verses:

In the morning in the winter shade
On the first of March, on the holiday
I thought I saw you breathing I miss you, Mike. Rest in peace.

Reflections on a quarter-life crisis: 5 lessons for my 25-year-old self

Five Things Friday: 5 Things You Should Do Before You Have a Baby
← House update: one headboard, two desks, one table and the best backpack ever
Souper Tuesday: Ten Things on My Table This Thanksgiving →