So, last week I was agonizing over first-world problems like not being able to find rugs for our new house and sucking at holiday things. Now, look. I get that these things are trivial. And don’t worry: when I get too dramatic, Pat is quick to mock me with a quote from SNL’s hilarious “My Super Sweet 16” sketch (this site is questionable and the quality poor, but you get the idea) that any given stressor is “literally worse than the Holocaust.” 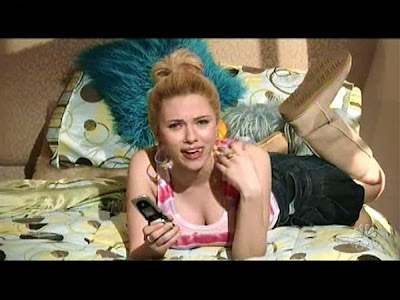 Of course, an ongoing issue is lurking behind all of this decision-making and new-things-trying paralysis. As I’ve talked about before, for as long as I can remember, I’ve been plagued by anxiety about making a “wrong” decision, no matter how small. So I feel like I’m taking steps toward being a normal human being/tolerable wife/semi-competent parent when I actually just do something and get on with it.

And, people, this weekend, I did. Mostly.

I decorated for Halloween.

I went to Michael’s with Rory. We squeezed through their narrow aisles, which were crammed with the last of the Halloween stuff. I quickly realized that a craft store like Michael’s expects its patrons to have a vision. And I’m not there yet. So I went someplace I feel a little more comfortable: Target.

Or course, when I say “a little more comfortable,” I mean that I can conquer Target blindfolded with one hand tied to the cart (and the other shoveling Goldfish crackers into the mouth of a screaming child). After a quick warm-up in the grocery aisles, the boys and I headed to the Halloween section. 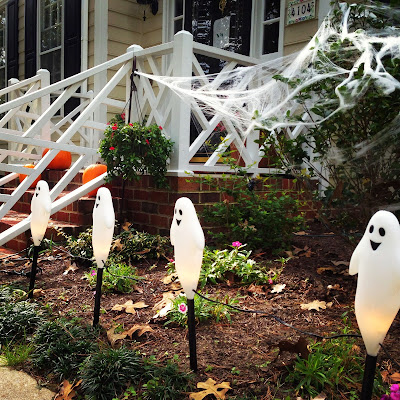 I picked a few things that I thought would make a decent impact: cobwebs, spiders and these ghost lights. It wasn’t a lot, but it did the trick. The true measure of success? As I attempted to stretch the cobwebs over our little shrubs, Noah came up the driveway with some neighborhood boys he was playing with and said, “Cool decorations, Mom!” And his friend, an older, presumably more jaded 7-year-old on a scooter, said “Nice house!” (Yes, I appreciate validation from a 7-year-old.) And what’s more? I kind of had fun doing it. Mission: accomplished.

I made some progress with the house.

There is so much to do with the house. I made a dent in the boxes we’ve shoved into the guest room, which is critical, as Pat’s mom is staying with us this weekend. I also cleaned out the garage enough that we can park a car in there. Then there’s the long list of furniture/decor I’ve been searching for.

I had been eying this metal entryway bench thing at Pier 1 for a while. I wasn’t really sure why I kept going back to it; it’s not quite my style. But there was something I liked about it. And it was the right size for our small entryway, and seemed like it would serve multiple functions. This weekend I decided that the courting period was over; it was time to tie the knot. It was on clearance, plus I had a coupon for another 20% off. 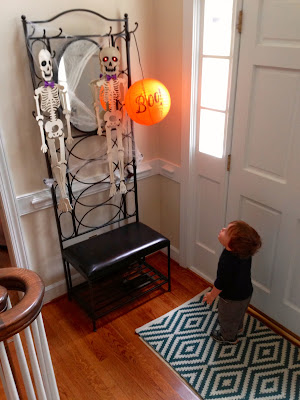 Pier 1’s Halloween stuff was 50% off, so I also got this pair of skeletons. More decorations! When you squeeze them, their eyes flash red and they say “Happy Halloween” in a really creepy voice, so of course both kids are obsessed. Oh, and what’s that under Rory’s feet? Could it be a new rug? Yup. In fact, as you may have seen on Facebook, I bought two rugs at Home Goods this weekend: one for the entry, and one for the laundry room. Hardly the top of the priority list, but it’s amazing what a $14.99 rug can do to cheer up some old linoleum. 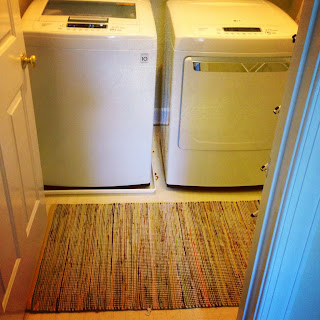 I also made some progress with bedroom decor.  I got a duvet set at Target, plus some decorative pillows from T.J. Maxx. But I still needed bedside lamps. We’d been using a mismatched pair that I got at Ikea during my swingin’ single days in Chicago.

After a borderline psychotic amount of shopping around, I decided on a pair of mercury glass bases and cute off-white shades at Target. They were 15% off, plus I got an additional 15% off with my Cartwheel app. (No, they are not paying me for this post. Though really, Target, we should talk.)

I was so freaking proud of myself – not only for getting such a good deal, but for finally making a decision – that I didn’t realize until I got to my car that I had walked out of the store without paying for the 24-pack of toilet paper under my cart. (Don’t worry, I took it back.)

Well, I get the lamps home, and people, they were too short. Sons of bitches.

Fortunately, I had seen some lamps at T.J. Maxx that were my Plan B. I raced over there ten minutes before the store closed to nab them. I was so sick of shopping, but I just needed to start the week with the lamp situation solved. I got them for $40 each, which was pretty much what I paid at Target. So, I’m still counting it as a success. 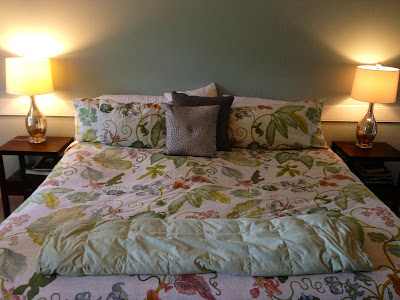 Now, if I can just find a headboard.

Up next: the ghost (who tonight was a goblin)

I have still not started on Noah’s ghost costume. I have identified an old duvet cover to use and bought (at Target, of course) a long-sleeved white T-shirt for Noah to wear under it. I attempted to measure him tonight after dinner, but it turned into a tantrum, then verbal sparring about how to make the costume (during which Noah yelled “I know more than you!” which, though of course I won’t admit it, may be true in this instance) which turned into a time out, which eventually just became bedtime. It was ugly for all parties involved.

On a lighter note, last week, My sister posted this picture on Facebook. 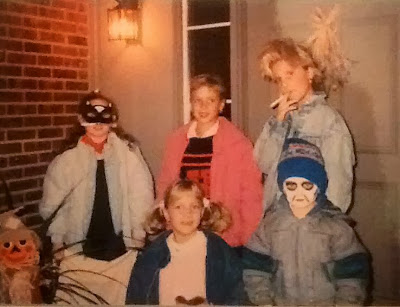 That’s me on the right. My costume was “gang member.” It’s true. I remember my dad gave me the name of a Chicago gang I could use: P Stone Nation. I wrote it on my T-shirt in marker (I suspect I also either tie-dyed or splatter painted that T-shirt). It’s a real gang; it’s actually called “Black P Stone Nation”, but I guess my dad thought wearing that on my T-shirt would confuse the neighbors? Also: nice cigarette, 9-year-old.

Long story short: my parents helped me dress up for Halloween as a cigarette-smoking member of a violent street gang, and I turned out okay. There’s nothing I can do to make Noah’s ghost costume so bad that it will scar him for life. Though if he pulls much more of the crap he did last night, one of us may not escape unscathed.

Update: January spending freeze (in which I shift all my emotional energy from furniture to frozen yogurt)
← Holidays make me feel like crap (and other confessions)
Pigpen’s Ghost →