We’re moving on Thursday. I finally had some time to write about the last week’s adventures while I was waiting at the new house for the painters.

So here it is: Moving, in three acts.

In the last week of packing, I’ve broken four things: a margarita glass, a pint glass, one fancy bottle of toner and – somewhat inexplicably – one plastic mixing bowl.

I broke the margarita glass on our bed. That sounds like it could almost be something sexy, right? In a kind of crazy, drunk and dangerous for people with blood-clotting disorders kind of way?

No. I broke it trying to pack the kitchen in my bedroom.The kitchen is the worst. Dishes go on forever. I’ve been trying to motivate myself by bringing everything into our bedroom, where we have the TV. (The bedroom is right next to the kitchen, so this is not as complicated as it sounds.) I have concurrently packed the entire kitchen, finished the first season of Orange is the New Black and watched the season premier of Law and Order:SVU (coincidentally featuring “Pornstache” from OITNB).

All packing was put on hold for the Breaking Bad finale. That required undivided attention.

Unfortunately, one night I tossed a new armload of glasses on the bed before I realized that the margarita glass was still laying there. I picked up all the big pieces, and then awkwardly vacuumed the top of the bed. A site to behold.

You know what the sad thing is? Each time something breaks, I’m relieved. I thought I’ve been really good at purging over the last year. We got rid of a garage full of stuff at the neighborhood yard sale in May, and I’m pretty good at doing regular junk audits. But still, the stuff! For nine years, we’ve been curating a dust collection on eight sets of pilsner, highball and old fashioned glasses. Plus martini and margarita glasses. And for what? Most of our entertaining these days revolves around a delivered pizza and beer straight from the bottle, served with a side of maniacal children. Even if we do get fancy and pour a cocktail, it’s usually in a cheap Ikea glass.

But I haven’t given up all hope. I’m paring down to six sets each. (Maybe less, if I keep breaking things.) You know, for all those fancy parties we’re going to throw in the new house.

Not everyone has gotten on board with my purging ways.

The guest/boys bathroom has been an interesting place to pack. The boys don’t use it much (they bathe in our tub, and have no toiletries beyond a Batman toothbrush and a tube of Thomas toothpaste). I basically ignore it. So my mom and sister, our most regular house guests, have claimed it for themselves.

The drawers are full of shampoo and moisturizer samples, Velcro curlers and ancient contact solution. The floor of the bathroom closet is piled with plastic CosmoProf bags of hair color, toner, foils, plastic mixing dishes, and that brush hairstylists use to paint the color on. In true Katie fashion, my sister appears to have never discarded the remains of our hair-coloring adventures over the last 8 years, but instead squirreled them away in the closet.

There was one hair closet discovery I will never throw out: a giant bottle of After-Burn Aloe Vera. It is still nearly full, even though it dates back to my sister’s first time visiting us in Durham almost ten years ago. She was coloring my hair in the bathroom of our first house here. We were chitchatting as she applied bleach, when all the sudden she started screaming. “Ahhhh! My hands! Ahhh, they’re burning!” She had forgotten gloves. Pat disappeared into the night for a remedy.

Even though she was in terrible pain, most of the tears that night were from us laughing hysterically as Pat raced back in with the intensity of a transplant surgeon carrying a heart in a cooler, except he was delivering two economy size bottles of aloe vera in a CVS plastic bag.  And I will always keep one so I can think back on that night and laugh.

Also in the drawer: three hairdryers. They’re only used by guests, so I didn’t know which to keep. I texted this picture to my mom and sister. 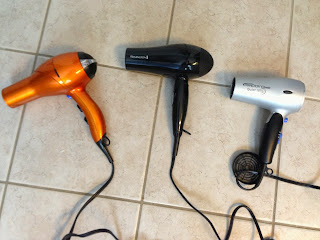 Me: Ok, guests, which of these 3 hairdryers from the guest bath do you want to keep?

Mom: I like the one I got you but anything works. Am at Kohl’s with 30% so…am in toy section.

Me: Which is the one you got me?

Mom: Orange one – got it at that messy Tuesday Mornings.

Me: I’ll keep the orange one if you like it, but I actually bought that one at Kohl’s and thought it was too heavy.

Mom: It doesn’t matter. Why not keep them all?

Trying to buy more toys for my kids as I try to purge AND trying to get me to keep two superfluous hairdryers? This is obviously a woman who has lived in the same house for the last 34 years.

But I did keep the black one and the orange one. Just in case.

The kids’ stuff has been the hardest to pack, because they insist (and in some cases, I believe) that they cannot be separated from any of their belongings for even one day. (Rory does this mostly in screech form.)

So today, while Noah was downstairs building a train track, I grabbed two teddy bears (neither of which were, to my knowledge, key players in his complex imaginary world) and ran up to his room, where I was surreptitiously boxing up some of his books and winter clothes.

A minute later, he appeared at the door.

“I’m packing them to go to the new house.”

“Noah, we are going to be living there in two days.”

“But they are Mary and Barry’s* parents. They need them!”

*Say these names together out loud. If you were around in the early ’90s, you’ll understand why I giggle every time Noah says them.

Encore: Biscuit and a theme song

I had 2.25 hours on Monday from the time I dropped Noah and Rory off at preschool to the time I had to pick Rory up. I spent that time basically having a manic episode.

Kids gone, I drove to HH Gregg to pick out a new refrigerator since the one they attempted to deliver on Friday was too big. This was the third time I have waited outside for the store to open. I greeted my two sales guys, Andrew (“Drew”) and Ray by name. They helped me pick out a different fridge, for which I was able to negotiate a lower price than the original. Boom!

On that accomplishment high, I did a quick lap around Home Goods, where I found at least five things I wanted to buy. But I resisted all of them, partially because I am savvy and full of self-control, but mostly because the back of my car was full of things to take to Goodwill and couldn’t fit anything else.

There’s a thing in behavioral economics called “decision fatigue.” The idea is that when a person is tired, stressed and worn down by decision making, it is more difficult for them to exert self-control and continue to make good decisions. Self-control, it turns out, is a limited resource.

I guess that’s how I ended up at Rise. 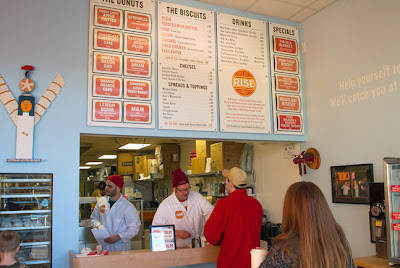 At this point, I only had 45 minutes before I had to pick up Rory, and still had to return a towel bar and pick up paint samples at Home Depot. So I took the biscuit to go. (Okay, and a couple chocolate glazed donuts for Pat. And me.)

I steered with one hand while cramming the mozzarella, garlicky spinach and roasted tomato biscuit into my mouth with the other. If you’ve had the good fortune of eating a Rise biscuit, you know that those things really require two hands. Remoulade was everywhere. I was almost to Home Depot, still devouring the biscuit, when that song from the ’80s came on:

Ain’t nothin’ gonna break my stride
Nobody’s gonna slow me down, oh no
I got to keep on movin’

I am embarrassed to admit this, but I totally thought, “This is my jam this week!” I licked the remoulade off my fingers and turned up the volume.

Souper Tuesday: Creamy Carrot and Millet Soup with Grilled Cheese Croutons
← Oh no, let’s go: packing like it’s 1999 and preparing for The Monti
October update: the move, The Monti, the Monga and the 18-month-old →