October update: the move, The Monti, the Monga and the 18-month-old

It’s been a while, and I’m feeling pretty rusty on this blogging thing, so bear with me. There’s so much to catch up on. October – my favorite month – is two-thirds of the way done. And what an October it’s been.

We’re in the new house. I basically went two straight weeks without sitting down: packing, purging, hauling, unpacking, arranging, shopping to find new things we need in this house. All of it has gone well except for the shopping part. There are several things we need: lamps, a kitchen table, a headboard, a chair for the family room, etc. But the bane of my existence right now is rugs.

Remember how I was all “I never put up curtains in my old house but I’m going to do it right away in this house”? Ha. Ha, ha, ha. Curtains are the least of my worries. I bet I could pick those bitches out and have them hung in an afternoon. But rugs are taking me down. Handed tufted, hand hooked, flat weave, machine made: they’ve conspired to drive me completely insane.

We have hardwoods in most of the house, so rugs are a necessity. At first I was like “I am going to get nice rugs. I am willing to spend some money on them, but I will find good deals. I know what I’m looking for.” Oh, hubris. 74 mind-numbing pages of RugsUSA.com later, I have gone cross-eyed, have 26 rugs in my cart, and I am no closer to ordering.

But I have bought two. Ladies and gentleman, introducing…

1) The World Market “It’s here so we might as well keep it” rug. I traipse to WM for their big Rug Caravan event, full of confidence and decision-making ability. Stuff two 5×7 wool tufted rugs into my CRV in the rain, drag them into the house, unfurl them on their respective rectangle of wood floor, only to find they are just completely wrong. I had Pat take one of them back while we were out of town. I kept the cheaper one because I just need something and I can’t stand to look anymore.

2) The Target clearance rug. I came across this puppy on one of the four trips I make to Target in any given week. It was smaller than what I wanted for Rory’s room, thin and made out of cheap fiber that has that icky feel like taking off wet mittens with your teeth (is it just me?). But it’s looks fine, it was $30 and it keeps our feet off the cold floor in the morning. I assume Rory will have some kind of accident on it in the next year or two that will make me glad I went cheap.

But all that is trivial. The headline, which I buried, is: we love the house. Our first night there, still surrounded by boxes, Pat and I each found a spot on the couch, opened a beer, and agreed that it is the house we have been looking for. The rest will work itself out. I hope.

I did the Monti

I did it! It was fun, it was challenging, it was terrifying. Most importantly, it was something I would not have been brave enough to do five years ago, and I did it. As we ate pizza before the show, Noah said, “Mom, just get up on that stage and laugh and laugh and laugh.” That was my back-up plan if my mind went completely blank.

I cannot convey to you how hard my hands were trembling as I sat in the audience waiting for my turn to go on stage. I cannot explain how bizarre it was to be on that stage: the lights are so bright, the audience nearly invisible. It feels like you’re telling your story in a vacuum. When you here laughter from the audience, it’s both grounding and discombobulating, because you can’t see them. The laughter is just confirmation that someone is out there. I told a story about my brief but tumultuous stint as Sam Mendes’ personal assistant. Before the Monti, I had started writing a blog post about it, so maybe someday you can revel in my shame, too.

I took the kids to my mom’s for a week 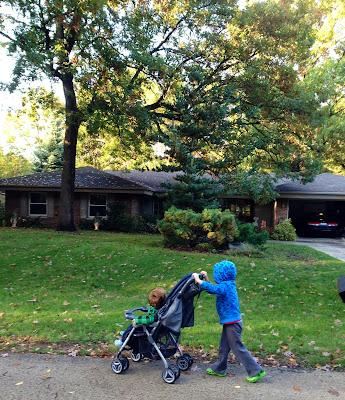 The fall trip to Illinois is becoming a regular thing. Like The Monti, traveling with the kids by myself is fun, challenging and terrifying. But we all survived and had a great week. Sadly, we did not make it into Chicago this year to see our friends there. But we packed in a lot of action at my mom’s house.

We got to see my sister, bro-in-law and my nephew Finn, as well as friends from childhood and their kids. Rory found every breakable and otherwise dangerous item in my mom’s house. Noah enjoyed the playground, a train ride at the mall, the children’s museum and Monkey Joe’s. He finished puzzles and played with the cars he keeps at Monga’s house (that’s his name for my mom). We made s’mores over a fire pit in the backyard. I watched him ride a bike down the same street I must have ridden my bike down 1,000 times. He was a pig in mud. 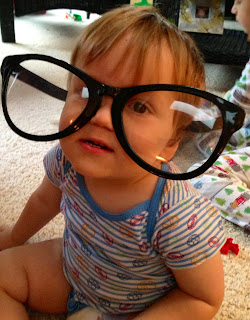 Oh man, 18 months is the best age. I remember thinking that 8 months was the best age, but 8 months came for Rory, and I was like “Ummm, this does not feel like ‘best.'” I must have just forgotten the one before the eight.

I mean, don’t get me wrong, this age is freaking exhausting. Rory is a redheaded tornado wrapped in a hurricane wrapped in barbed wire and possessed by a thousand angry cats. But he is awesome and hilarious, too.

Just like his pediatrician predicted, there’s been an “explosion” of language skills between 15 and 18 months. But only on his terms, of course. He’ll jabber away like he’s reciting the Gettysburg address, but if you say “Rory, say ‘hi’ to the nice lady,” he’ll look at you like he’s a mute and/or you’re a moron. And then she’ll walk away and he’ll go “Hi, thankyouwelcome,” like one of his talking stuffed animals that  bursts into “I love you!” in that creepy robot voice even though no one is near it and you just turned off the light in the living room. And then you have to run up the stairs just in case that descendant of Chucky is coming after you for mocking the way it sings the ABCs and throwing it in the corner.

So that’s the big stuff so far. And we still have our nine year wedding anniversary on the 23rd and Halloween to look forward to. Happy October, all.

First Day of Kindergarten: Riding the Waves
← Scenes from a Move
Holidays make me feel like crap (and other confessions) →