The Call (or, the little red rooster)

Yesterday, less than 45 minutes after I dropped Rory off at school, I got the call.

“Hi. Rory has been crying since you left. We think that’s enough for today. Can you pick him up?”

I wasn’t expecting this call, but it wasn’t out of the blue. Rory had done fine in his first one-hour session of PMO (“parents’ morning out”) last week. But yesterday morning, when he was greeted at the classroom door by a sobbing toddler, he buried his face in my shins and wailed. He was still wailing as one of the teachers peeled him off my legs and pulled him across the “kiss and go” line and into the classroom.

“That’s too bad, I’d hoped he had calmed down. But yes, no problem, I’ll come get him right now.”

“Okay,” said the preschool director. “But before you do, we need to talk about Rory.”

Has anything good ever started with the words “We need to talk?”

The director went on to very politely outline her concerns with Rory’s “mobility issues.” It seems he was “insisting on being carried” and using tactics like “flinging himself down and rolling in the mulch on the playground.”

“With two teachers and eight kids, that just isn’t possible, she continued. “There are some, well, requirements for the class.”

“Yes, of course, of course,” I said. “I’ll be right there.” I hung up the phone and burst into tears.

First, let me say that I totally respect her position. It’s not daycare (where Noah cried every day for 3 months at drop off). And to my knowledge, Rory is the youngest child in the class, which could mean he’s not as ready for participation in a group setting as the others may be.

It just so happens that a concern around “mobility issues” strikes a very sensitive nerve for me, because it’s not the not the first time such concerns have been raised. At Rory’s one-year check-up, his pediatrician suggested that he be assessed by a physical therapist. He was sitting, but not getting from laying to sitting or sitting to standing. He deftly log-rolled anywhere he needed to go, but was not crawling.

We had a home therapy visit. The coordinator asked lots of questions and showed us some exercises to increase Rory’s core strength. By the time they returned for visit number two, he was sitting himself up. And by their third visit, he was crawling. His evaluation score was too high to qualify for the state physical therapy program. And, just shy of 15 months, he started walking. That was almost two months ago.

Naturally, I had concerns about starting PMO: he’s at a peak age for separation anxiety, he just gave up his morning nap, and it’s hard to imagine him sitting in one place for “circle time.” But his ability to get from one place to another wasn’t on the list. Until now.

When I arrived at school, the director was standing outside the front door, holding Rory. He appeared to have calmed down, but as soon as he saw me walking toward them, he burst into tears. I took him, and he buried his face in my shoulder.

“At this point, he’s just angry,” the director told me. “I tried to check his diaper, and he lost it – bucking and kicking me.” I guess I should have mentioned on the “information about my child” sheet that he does this every time I try to change his diaper.

Oh, Rory. As his teacher said after his first day, “That red hair really goes with his fiery personality.” Don’t I know it. The squawking and the fury. My little red rooster.

We go to Target. Rory is as pleasant as can be. When we get home, I take him out of the car and let him loose on the driveway.

Do you remember that Brady Bunch episode when they’re in court with the guy in the neck brace, who is totally faking it? Mike Brady throws a briefcase onto the ground, and the guy turns his head to look at it, proving that he’s not really injured? 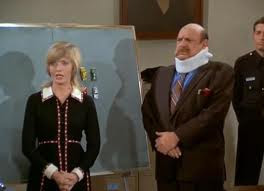 Watching Rory on the driveway, I imagined staging a similar scene. Because there he was, mobile as can be. Pulling balls out of the garage, throwing them into the yard and retrieving them. Dragging out anything with wheels and pushing it across the driveway. Attempting to run into the street.

I contemplated going all Rossen Report on him with my phone’s video camera. Obtain secret footage to show the preschool director. Proof of mobility. “See, he’s fully capable of participating! He’s totally playing you!”

But she probably knows that, and that’s part of the problem. Like the physical therapy people had said, “I think he’s capable of walking, he just wants to do it when he wants to do it.” At home, throwing himself down in the mulch is one of the few ways he can divert our attention from Noah’s never-ending stream of conversation. With seven other kids in the mix at PMO, it probably seems like the perfect way to get a little love.

And I’ll admit it: Rory making it in PMO is as much (or more) about me wanting six hours of freedom each week as it is about Rory “having fun, learning to play with other kids and developing his verbal skills,” which is how I answered the question “What do you want your child to get out of PMO?”

Rory didn’t have school today, but I made a point of having him walk from the car when I took Noah into his class. The director was standing outside the first door, the one leading into Rory’s classroom. He froze on the sidewalk.

“Come on, bud,” I coaxed. He did not budge. I lifted him up and deposited him a few feet past the door. We proceeded on to Noah’s classroom.

“Good morning, Rory!” said Noah’s teacher. Rory burst into tears. We went back onto the sidewalk. It was nearly empty now. The director was still standing outside the door leading to Rory’s classroom, talking to another parent.

“Mobility now!” I whispered to Rory. Two steps down the sidewalk, he collapsed. I hoisted him up, only to find that he had lost a shoe. I squatted and squished his foot back into the velcro straps. Up. Five seconds later, he’s back down on the sidewalk. The shoe, again. This was not the image of advanced mobility I had hoped to portray.

“We’ve got to get you some new shoes!” I said loudly.

Because that must be it. The shoes. Right?

The director suggested that I bring Rory as planned tomorrow, but wait in a nearby room (“out of sight, sound and smell”) so I’ll be close at hand to take him home if needed. I don’t know how much time we’ll give it before pulling the plug on Rory’s adventures in PMO this year. But I think I can be pretty confident that if he’s not happy, the little red rooster will let me know.

Sista sista (I totally knew how much I missed ya)

First Day of Kindergarten: Riding the Waves
← Life After (Cleaning) People
Commandment #4: Cook most days (or, man vs. garbanzo bean) →