On Labor Day, the unofficial last day of summer, Noah learned how to swim. 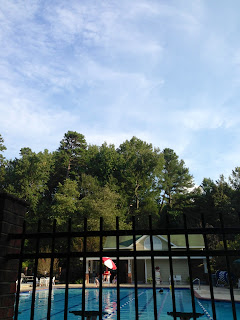 The moment was as poignant as it was proud, as he could have drowned at our neighborhood’s summer kick-off event less than three months before.

The annual ice cream social is about as good as it gets for organized neighborhood events. Sure, behind the scenes moms are sweating and scrambling to line up tubs of ice cream and bottles of hot fudge and jars of rainbow sprinkles. But for everyone else, you just show up to the pool, wait in line for your messy bowls of ice cream and eat.

Pat sat with Rory while Noah and I lined up for our scoops of chocolate and vanilla. I let Noah adorn his how he wished and dumped some chocolate sauce and whipped cream into bowls for Pat and me. (Rory would be sharing with both of us. With Noah, we were able to hold off on sweets until well past age two. But Rory, who wants to do whatever his big brother does, started grabbing at donuts and cookies well before he was one.)

We crowded onto a picnic table with our neighbors and their kids. We took our time enjoying the ice cream and conversation. Pat and I handed Rory back and forth, splitting the heat of his body and the feeding detail.

And suddenly, I realized Noah wasn’t at the table.

I stood up, still holding Rory, and looked at the pool. And there, in the shallow end, maybe three feet in front of the life guard stand, was Noah. Or, at least, Noah’s face. Chin tilted up, he was gasping for air and paddling furiously but silently.

Coincidentally, or really, fortuitously, I had read this article just days before.  If you haven’t yet, read it.

Later, I apologized to all the parents for yelling “What the fuck!” in front of their children.

Pat turned, and, seeing Noah, jumped out of his seat and raced into the water, still wearing a T-shirt. Noah burst into tears as Pat pulled him out.

I had a word with the lifeguard, who had been chit-chatting with fellow guard standing near him. That is, I had words. Choice words. None were the F word; I had gotten that out of my system.

Noah was fine. I hugged him tighter that night at bedtime, and watched him closer and insisted on water wings at the pool, but the summer went on normally. In a total parent fail, one that I have no excuse for, we contacted numerous people about swim lessons, and then never signed him up. At the pool, when we did allow him to remove his wings, he went vertical and thrashed and gasped, no different from when I had spotted him at the ice cream social, except that now I was always in the water with him.

But not on Labor Day.

Labor Day had been an emotional one for Noah. He was sad about Aunt Katie, Uncle Mike and cousin Finn heading back to Madison. He was ambivalent about school starting up again the next morning. As tedious as the second half of the summer had been, with me adjusting to staying home, it was still novel to Noah. He wasn’t sure he wanted to trade in any of that time for another year of preschool just yet.

I was a little overwhelmed with all of it, myself. I had recently attended the school orientation for both kids and was reminded that it was going to take a lot of work to get those six hours of freedom each week: lunches, changes of clothes, snack duty, chaperoning.  The crying at drop off. And with two kids on different schedules, the driving! I needed a final summer fling, too. It was late afternoon when we headed to the neighborhood pool with a thrown together picnic dinner of peanut butter sandwiches, grapes and goldfish.

The evening was still warm. The pool was relatively empty, with that soft late-summer buzz in the air. I splashed with Rory while Pat played with Noah. And then Pat said “You gotta watch this – he’s swimming!” And indeed, water-wingless, here came Noah.

I handed Rory to Pat.

Noah launched himself in my direction from the stairs of the shallow end. Craning his neck to keep his face out of the water, he paddled toward me, legs kicking below the surface. I moved backward.

I kept moving, and he kept paddling toward me, pausing at one point to roll onto his back. But he flipped back over and kept swimming.

There was a group of teens (pre-teens? Who knows these days.) lounging in the water near the lifeguard stand. As Noah swam by them, right where he had nearly gone under just months before, they started to cheer. “Go, go! Yeah!”

When my back touched the lap lane rope, we stopped. He had crossed almost the entire width of the pool.

And then he did it again.

Finally, we got out of the pool. It was getting late, and awesome accomplishment aside, he had school the next day.

I started unpacking our sandwiches. But Noah was too excited to eat. Or sit down, for that matter.

“Mom, all those kids were cheering for me!”

“I know,” I said. I don’t know if I have ever seen him so proud. “One of them said you should join the swim team next year.”

“I know, I heard them!” he exclaimed.

“Well,” I said, “Tomorrow you can tell the kids at school that you learned how to swim.”

“I was just thinking that!”

We ate our dinner in the shadows of the September sun. The sky was so blue. My heart brimmed.

Vacation by Numbers: Noah and Rory’s Excellent Adventure
← Coupejacked
Movin’ on Up (that is, if I can move on off the couch) →