In a day of ups and downs, things had been trending up.

Sure, there was Rory’s face plant in the kitchen, resulting in face-blood of unspecified origins (nose? tongue? cheek?). But we had regrouped, made it to the library to return 12 books (only one short of the baker’s dozen due) and picked out another seven to take home (including one Babar book – boo! – and two Dr. Suess Books. Yay!).

And, the big achievement: Noah not only agreed to attend baby lap sit, he participated in the singing of “Hickory Dickory Dock” and “Twinkle Twinkle Little Star.” Rory did some Franken-wandering, most mostly listened, clapped and smiled. Score!

Now, we had just finished lunch. Well, Rory and I had. Noah was still meandering through his sandwich, stopping after every bite to inform me that the next truck he wants is a log carrier, and then retracting that statement and replacing it with a request for a cargo truck, then back to the log carrier, and so on.

I was loading the dishwasher when Rory wandered over and picked up the fairly substantial wooden stool we keep in the kitchen so Noah can reach the faucet and help with cooking. I watched with amusement – and some concern for his toes – as Rory heaved it past the kitchen table, out into the living room and set it in front of the fireplace.

He picked up a book and, facing away from us, sat on the stool and paged through the book. I snapped a picture to send to Pat with the funny story of our little Sampson (who, on a related note, had his curly locks cut off just yesterday. He clearly didn’t lose his strength, but he may have lost some of his dignity. Seriously, I don’t know why these women go all Dumb and Dumber on my poor kids’ hair.) 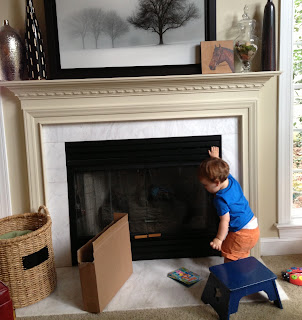 I turned from watching Rory to put the bread and grapes and cheese back in the refrigerator. Noah chomped quietly at the table. And I actually had a moment, right then, where I thought “You know, I’m glad I’m staying home and get to witness these funny little things.”

Suddenly, a cry went up from the living room. Rory had moved out of my line of sight, so I asked Noah “What’s wrong with Rory?” “Nothing,” he said. “He just started crying.”

I rounded the counter and approached Rory. He was standing frozen, hands in the air, shrieking. His hands were smeared with a dark, clay-like substance. What was that? My first thought was soot, but we have a gas fireplace. Where else could he have gotten covered in that dark brown —

Oh. Oh, no. I peeked over Rory’s shoulder, and my fear was confirmed. Thick, sticky and flecked with grapes, poop had exploded out of Rory’s diaper and was halfway up his back.

“Ahhhhh!” I yelled, the same noise as when I spotted a cockroach behind our toilet.

I hoisted Rory under the armpits, raced to the bathroom, and set him in front of the tub. I had flashbacks to last week, lifting Noah into the tub after our library outing, and nearly breaking my neck slipping in his pee.

Rory looked at his hands and screamed hysterically, like a woman in a gangster movie covered in her slain boyfriend’s blood.

Noah entered the bathroom. He looked curiously at Rory. “What is it, Mom?”

“Rory had an accident. Can you grab the wipes?”
A pack of wipes was delivered. I started with Rory’s hands, seemingly the primary source of anguish. Then I moved to the back. I’ll spare you the details, but let’s just say that the cute outfit I had picked out for Aunt Katie’s arrival later today may never recover.

“Mom, there’s still poop in the living room,” he reported through a mouthful of bread.

Triage complete, I dropped Rory into the tub. He kept screaming as I soaped and rinsed.

“You should spray Rory with Clorox Clean-up Spray, because it’s for big messes.”

My son. Carrying on my legacy with his astute memorization of and/or complete brainwashing by every commercial he encounters. (“Mom, you know what cereal we should by? Krave. It has great chocolate flavor. And how about some of those Stompeez?”)

Yep. It really stinks. Now, time to clean that carpet!

First Day of Kindergarten: Riding the Waves
← Ring-a-Ding-Ding
It’s hip to be careful →