Sweet dreams are made of creeps

Friday night, I had a dream that I lived in the apartment above Dooce. In real life, she’s a blogger I admire. In my dream, she was a romance novel writer. Those with the barrel-chested, bodice-ripping Fabios on the cover – every woman’s fantasy, right? Gross. Not mine.Though I was happy when Dooce gave me one of her books as a housewarming gift.

In the next dream, I was having an affair with Nick Cave.

He was a professor. When I went to visit him in his office, he was lying on his desk, shirtless, pouring water on his chest. If you clicked on that link to his picture, you may find this hard to believe, but it was a good dream. When “Get Ready for Love” shuffled on during my run the next day, I blushed.

Later that day I zipped over to the closest quickie nail salon to get my thrice-a-summer pedicure. Sitting in the massage chair, I non-verbally implored the bored-looking pedicurist to rub my feet just a liiittle bit longer. I perused Twitter. And then this: 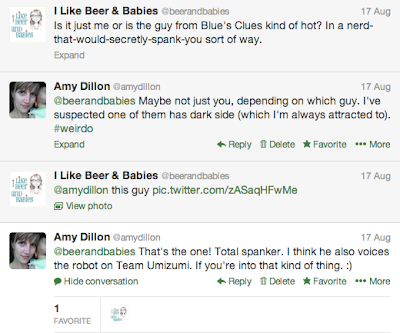 This is not a new thing, nor a secret to people who know me reasonably well. Are you familiar with Cillian Murphy? He is probably best known as the Scarecrow in the latest Batman movies or the rich guy from Inception. I first saw him in 28 Days Later, a great zombie movie in which he is quite hot.

But was that the movie that got me hooked? No. That would be Red Eye. Do you remember that somewhat campy 2005 Wes Craven thriller, co-starring Rachel McAdams? Well, I do, because from the first trailer, I became totally obsessed with Cillian’s seductively menacing character.

We saw the movie in the theater. Pat gave me the DVD for Valentine’s Day. And several Christmases later, when Pat made coffee mugs for our extended family featuring adorable pictures of Noah with captions like “I love you Grandma!”, I got one emblazoned with Cillian’s face.

My latest fantasy man: Jamie Dornan as Paul Spector. Stalker, serial killer, dreamboat. If you’re looking for some new nightmare fodder, check him out on Netflix.

Of course, I don’t actually want to rendezvous with hit men, serial killers or anyone who converses with an imaginary dog. (And I state this point emphatically to any serial killers who may be reading.) I never dated creepy guys. Pat could not be any further from menacing. Even better, he gets my creepy guy thing. He wooed me with Nick Cave tickets. He humored me by seeing Red Eye on opening night, and just rolled his eyes when I got moony over The Fall.

And he can rest assured that I draw the line somewhere. There will be no role play involving this sweater: *For what it’s worth, when you get him out of that sweater, the Blue’s Clues guy is pretty good looking.

Now, come on, people. Don’t leave me hanging. Tell me your weirdest crush, celebrity or otherwise. I’ll reward the best response with a gently used copy of Red Eye.