August 5, 2013 · in family and parenting, reading and writing, travel

I’m back from the beach. It was exactly what I needed it to be. 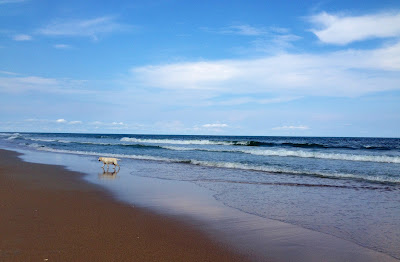 We went back to the same house for the third year in a row with some good friends of ours. At peak occupancy, we had six adults and seven children, all age eight and under. Needless to say, “relaxing” isn’t the first word that comes to mind. But, maybe surprisingly, “renewing” is.

More “deep thoughts” on that in Beach, part 2. In the interest of easing myself back from vacation, I’ll start with the easy stuff. These are a few (okay, ten) of my favorite beach things.

1) The outdoor shower. The sky above, the water dripping onto plants below. It is the best. It would be weird to build one behind my garage, right?

2) No make-up, hair products or hair dryer. Could I do this every day? Yes. Will I? Usually, no. So it’s nice to have one week to let my age spots, invisible eyelashes and salty, sleep-smooshed hair hang out.

3) Naps. I got three. They were incredible.

4) Books. I read two and a half: Julie & Julia (recommended by a clerk at Barnes and Noble as my best option from the clearance bin; I enjoyed it more than I expected), Await Your Reply (another excellent book from Dan Chaon; I could not put it down) and Happiness for the Home (the latest Gretchen Rubin book; somewhat repetitive of the Happiness Project, but I can always use a refresher).

Quick poll: have you read Telegraph Ave (Michael Chabon) or Canada (Richard Ford)? I was excited when the e-books became available from the library, but after two pages of TA, I decided I couldn’t focus on it at the beach, and I read a bunch of bad user reviews of Canada on Amazon. Which (if either) would you recommend for my next read? 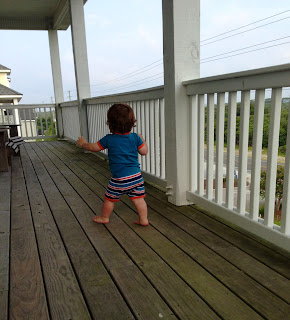 5) The front porch. It’s a covered porch on the sound side, with a view of the bridge to the island. It used to be Pat’s secret hiding place where he could sneak away with a beer and watch the sunset. But Rory discovered it this year, and he used it as his own personal walking practice pen. Where Rory went, so went most of the other kids. So we spent a lot of time out there.

6) Lottie, the 12-year-old lab who belonged to the family in the house next to ours. (That’s her in the picture above.) When I first saw dogs on the beach, I thought “poop on the sand! barking at all hours!” but she was amazing. I loved watching her wait patiently at the waters edge while her owner played in the waves, roll joyfully in the sand, or stretch out in the shade under the umbrella. The picture of contentment.

7) Beach meals. It was certainly a challenge to keep all those kids (and adults) fed while trying to relax, and working in a kitchen with limited ingredients. But it was also freeing. At home, most nights I insist on making a “meal”: at least partially from scratch, somewhat balanced, and acceptable to kids and adults (it’s getting harder as Noah gets more finicky and Rory gets more mobile, limiting my available cooking time).

But at the beach, “healthy” meant adding some frozen green peas to the plate onto which I had just dumped a bag of Goldfish. We did cook some: we were lucky that one of our friends made a delicious shrimp boil one night and salmon another. My contribution to dinner was less impressive. As much as I like to cook, when I have to feed a crowd, I panic, and resort to my default: breakfast for dinner. So French toast, scrambled eggs, blueberries and peaches it was.

8) This cocktail: gin, sparkling grapefruit soda and a sprig of rosemary. So good. Thank you, Emily.

9) A run. I did it. I exercised at the beach. Once. I didn’t want to run on the beach, so I did the first mile along the main road. At noon. On garbage day. You can imagine the smell, but more disconcerting were the animal carcasses: a little bird, a snake who appeared to have been lynched with a bungee cord. It was not pretty.

When it came down to a game of chicken with the garbage truck, I found the first beach access and made my way to the sand. I don’t know why I was avoiding it. Running on sand was more challenging, but the scenery – and the breeze – made it worth it. Also, there is nothing like taking your shoes off at the end of the run and wading into the ocean.

10) The kids. You really get to see a whole different side of your kids when they’re thrown in with another family for a week. Noah turned out to be braver and more flexible than he (and I) expected: running into the waves and sleeping in the bunk room with other kids. Rory’s walking skills and personality blossomed, and the girls argued over which one of them he liked more, while the boys declared him “hilarious.” I discovered some things about myself, too. I’ll cover that in Part 2.

First Day of Kindergarten: Riding the Waves
← Kick Out the Jams, Mothers (and fathers, and anyone else)
Like sands through the hourglass, this is Beach, Part 2 →