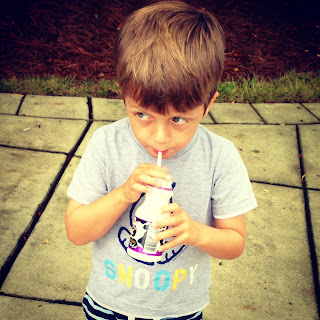 This morning I decided that 4 years, 7 months and 18 days is the exact age I want Noah to stay. Forever.

We had just taken my mom to the airport and stopped at our favorite donut shop. And by “our,” I mean “my.” I try not to go often, because it is insanely decadent and I have no willpower around donuts. I always end up feeling gross after spending the day working through a half dozen like a pride of lions with an elephant carcass.

The donut shop is across the street from where Noah gets his haircut, and it usually makes for great bribe fodder for those dreaded visits.

Today, though, as a reminder of why four is a terrible permanent age to choose, especially for my child, who argues for sport just like me, Noah zigged where he’d normally zag. We had this conversation just before we left:

Me: “Get in the car so we can go to the airport, and then we can stop for donuts on the way back.”

Noah: “At the place where we go after my haircuts?”

Noah: “I don’t want donuts unless I can get a haircut first!”

Despite this, we had made it to the donut shop. It was one of those outings where Noah was thrilled by every aspect: taking a number and waiting for it to be called (“Mom, they said 48!”), ordering his donut (double chocolate cake; who wouldn’t be thrilled?), the creamy coldness of the milk, the plastic firetruck in the kids’ play area.

The tables were all full, so once we had our donuts, we walked to a fountain in front of another storefront. I didn’t have a penny for him to throw in, but he wasn’t upset; instead he mulled over which was water spout was the “prince” and which were the “kid” and “baby” spouts.

We sat on a bench and ate. He exclaimed happily over the chocolate shavings on the donut (“Like sprinkles!”) and gave me a taste without hesitation. As he sat next to me, chattering away, I thought, “Please don’t get any older. I want you just like this forever.”

Of course, it couldn’t have been more than an hour before I muttered to myself “I am going to kill that kid!” as he dramatically refused to go the the grocery store. And as I write this, Pat is doing his half of Noah’s bedtime routine, which has become a long, drawn out affair loathed equally by all parties involved. I’m hearing the scrape of the chair across the kitchen floor as Noah sulks into it, moaning about the options for his bedtime snack. And…there goes a glass of water onto the floor.

On a side note, in addition to donuts, I earned my Fun Mom points today by building this “parking garage” out of a Pampers box. I thought you’d be impressed. Noah sure was. 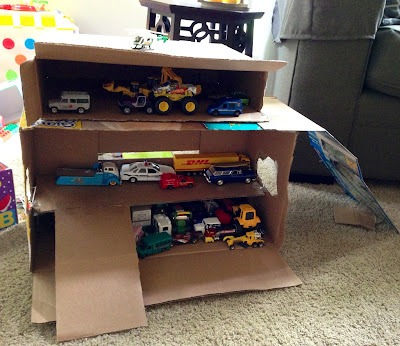