I’m back, and it feels good to be back!

First, I’m back online, typing on the very first computer I have ever owned. I kid you not. For the last 17+ years, all computing has been done at the mercy of a university computer lab (do those still exist?), generous roommate, public library or employer.

Sure, I have all my iGadgets for standard people stalking and online SALE! perusing, but when it comes to extensive writing, I have been at a loss. And now, thanks to my dear husband who saved me the ordeal of determining which to buy, I have my very own, brand-spanking new laptop from which I can message him in next room “How do I adjust the text size on the screen?”

Second, I’m back emotionally. At least, back enough to where I am motivated to do something at the end of the day other than crack a beer, recline into a pile of pillows and yell “Snap!” every five seconds at  an episode of Downton Abbey, which we finally started. I think I need at least a full week staying home with the kids before I can formulate my opinion on the matter, so I’ll save that for another post. (Though, if pressed, I might compare myself to Noah in a timeout, banging on the door, screaming “Let me out of here!”)

Instead, I’ll get back to my happiness commandments. Specifically, #2: Get Sweaty, which has proven to be extremely challenging but absolutely critical to my sanity over the last week.

This is actually the third version of my post about this commandment. The first time, during my last week at work, I wrote about how I finally got back to working out about three months ago after being more or less inactive for 3.5 of the past 5 years (basically, both times I was pregnant and the year following each). It was all true, but upon re-read felt overly optimistic, as if I had now, once and for all, conquered the exercise challenge.

So I drafted a second version about a key component of getting sweaty: my workout playlist. I hit shuffle and wrote about the first ten songs that came on, in hopes that you would, in turn, share your list with me. I may still post that because it was fun and I really would like your suggestions.

But then, last week, my job ended, we went on a quick, glutinous vacation and I had my first day of stay at home mom-dom. And I had to write this post all over again. Because that week reminded me of why exercise had been so hard to keep up all those years. And why it is so absolutely necessary. 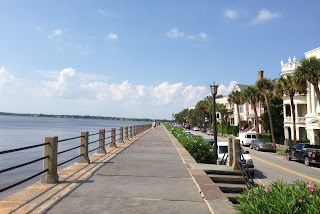 Vacation was fun. We mostly ate and drank, but we did do some sight-seeing and have a gorgeous (if hot) run along the Battery our first morning there. By the second day, I really missed the kids. So I was eager to get home, even as I felt the end-of-vacation blues lurking. The end of vacation also corresponded with something else: our nanny’s last day, at least for the foreseeable future, and my first day of staying home full-time. As I’ve mentioned previously, I assumed this would be tough. But I had no idea how tough.

I had that burning eyes/clenched throat cry feeling the minute we walked in the door. I held it together as Kelly pulled out of the driveway (and Rory simultaneously threw up on my foot), we ate dinner and gave the boys baths.

But as soon as the kids were in bed, I ducked into the bathroom and, as in a Lifetime movie, started bawling. It continued throughout the night: snot-bubbling, mascara-smearing sobbing. It felt like when I had been dumped by my boyfriend the summer after freshman year of college: I’d listen to his mix tapes and cry while driving to my office job, and then go sit in a stall in the bathroom on my lunch hour and cry some more. Which is typical for a college break-up, but really embarrassing to be doing at 35, ostensibly over a child care provider. I felt like a crazy person.

I had known for a full two months that my last day of work was coming. And, aside from some anxiety, I thought I was okay with it. But it wasn’t until I actually did not have a job to go to the next day that all the emotions – those I knew I had and some I didn’t – overwhelmed me. 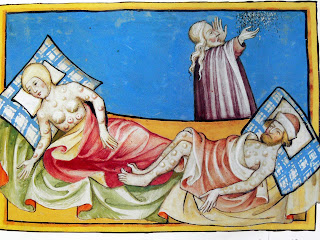 But did I turn to my Ten Commandments of Happiness? No. I would have turned to alcohol, but I’d already consumed more in the previous two days than I had total in the last two weeks, so it wasn’t appealing.

Instead, I turned on the TV. I ended up watching a two-hour documentary about the bubonic plague. Ironically, it was somewhat uplifting; how could I not laugh while comparing my own dramatic wailing to that of the 14th century Europeans coughing up blood on the screen?

The next day was my first full day home with the kids. It was draining. As in, I was drained by 10 a.m. and it was downhill from there. By time Pat got home, I did not want to do “positive” things. I did not want to follow my commandments. I wanted to sulk, make passive- aggressive comments in hopes of garnering pity, and drink beer (the one day break was plenty).

But instead of (or should I say, before and after) doing those things, I put on my shoes and stomped out of the house for a humid, sweaty run. And I’ve done it (or something similar) every night since. I have never needed it more. I’m not running long distances, but I feel like Tim Robbins escaping Shawshank. There are “freedom” hand motions.

Of course, there are other ways to get sweaty: riding bikes or taking walks with the boys and dogs. Pulling weeds, watering flowers and attempting to keep my herb garden alive. Scrubbing the kitchen floor. And I’d be remiss not to acknowledge the importance of getting sweaty, er, indoors in, well, ways that I won’t detail in this blog, particularly because my mom reads it. (And prints out copies to show her friends. Hi, Mom!)

But when it comes down to it, it’s the real, blood-pumping, can’t-think-of-anything-but-getting oxygen-into-my-lungs, escaping-the-world stuff that makes the difference for me. And I can’t let anything – including the bubonic plague – get in the way of that.

Last day of work jitters: confessions of a Maxxinista

Monday mantra: Be here now.
← Last day of work jitters: confessions of a Maxxinista
Kick Out the Jams, Mothers (and fathers, and anyone else) →