Happiness Commandment #1: Write, write, write (or: How I Learned to Stop Slacking and Love the Blog)

July 11, 2013 · in happiness and better living, nostalgia, reading and writing

Previously on Hot Breakfast: I closed my eyes and jumped into the land of the laid off.

And I identified my ten commandments (I wasn’t going to label them as such, but I hereby change my mind) for feeling more centered and – hopefully – happy, as I figure out what this new stage of my life is all about.

I’m starting here because my live is writing is why I’m blogging in the first place, despite that, as Thomas Beller so accurately observes in this article, it feels “strange, exhilarating, outrageously narcissistic, frightening, and embarrassing.”

Gretchen Rubin, the author of the book that inspired me to write my commandments, says “Do what you do.” The idea: you have probably already done/are already doing the things that make you happy.

She posed several questions to help people think about what these things may be, including “As a child, what did you do in your free time?” This one in particular resonated with me, because the answer was so easy: read and write.

Reading and writing weren’t just what I did with my free time as a kid; they were my obsessions. For summer reading challenges, I always required an addendum to log all the titles. I took books into the shower with me rather than put them down for ten minutes. I was grounded regularly (usually for “sass mouth”), but it was hardly punishment because I got to sit in my room and read. (My best friend Jessica suggested that I be grounded from my books instead.) More on that to come when I explore commandment #5: Books > TV.

Writing was a natural extension of reading. And write I did. Journals (starting with a lockable diary covered in pastel hearts) full of banal observations (“We were watching The Cosby Show but I said shut up and now I’m in my room”), lists (boys I liked the most) and longings (to be liked back by the boys I liked the most).

There were also my early attempts at fiction: “Brownie Bear Goes Fishing with Her Tail,” a kindergarten project that I wrote and illustrated (though my dad certainly deserved ghostwriting credits). For reasons that escape me, the book was bound in a cardboard cover, housed in our school library and, according to the card in the front of the book, borrowed once. By me.

In third grade, I spent every free period laboring over “The Underground Mansion,” a Nancy Drew rip-off homage. And there were the countless untitled stories that never made it past the opening scenes: always detailed descriptions of the main character (usually “Heather English”), her bedroom (the one I wished I had, often with a window seat) and her siblings (never less than six, always including a popular older brother with a cadre of cute friends).

The writing continued through high school and college: more journal entries, poems, song lyrics, short stories, articles for the school paper. And then, in my early 20s, it slowed. In retrospect, the harbinger of the decline was during my last semester of college. My creative writing teacher encouraged me to take a class with visiting author A. Manette Ansay, whose book Vinegar Hill had recently been an Oprah Book Club pick. Registration had already closed, but my teacher was willing to pull some strings to get me in. I said no.

I’d like to say there was a good reason for it: a conflicting class, or even a Franzenian rejection of anything anointed by Oprah. But no: I opted out because the class would make me miss Turkey Burger Tuesdays – which, somehow even less exciting than the name suggests, consisted of eating dinner on a futon while watching reruns of The Simpsons and Seinfeld with my roommate Sara and our friend Joe.

It was downhill from there, and right around 23, the writing stopped. I was in a happy relationship, which deprived me of the angst that had, until that point, been a primary source of inspiration. (And boy, did it inspire some cringe-worthy drivel. A certain 7th grade poem, with the closing line “But you are so far away, and I weep,” comes to mind.)

As I fell out of the habit, other things rushed in to filled the time: a wedding to plan, a house to maintain, other hobbies, a career, kids. But I missed writing. The few times I did, I found myself completely immersed in the crafting of sentences, the writing and rewriting. It was nerve-wracking but exhilarating. And as a bonus, with blog posts, I got feedback. I die a little bit inside each time I hit “publish,” but hearing people say they enjoy or identify with something I wrote is immensely gratifying.

So while I’m uncertain about what I’ll do in the immediate future (other than enforce mandatory afternoon “quiet time” and binge eat animal crackers), I do know that I am going to write. Because it’s scary. And satisfying. Even if just for myself. Though I hope you will enjoy it, too. 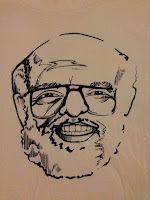 Post script: This entry is dedicated to Robert James, my high school newspaper advisor and 9th grade English teacher, who died on May 19. Mr. James didn’t just teach the rules of grammar and writing, he encouraged kids to pursue their own unique creativity, and treated them with respect. Mr. James introduced me to Will Shortz and NPR, and helped me find my voice as a writer. Thank you, Mr, James.

Never, never, never give up (a quitter’s resolution)
← Sometimes a girl just needs to get laid off.
Last day of work jitters: confessions of a Maxxinista →